The wide black leather waistbelt with huge buckle is a survival of the belt first worn by the pipers of the 79th (Cameron) Highlanders in the 1840s.

It is now so commonly worn that to wear a kilt without such a belt is thought to look ‘odd’ – at least by some people – but I rarely wear one myself anymore, as a wide black band around your middle is NOT at all ‘slimming’ in any case, and when worn by ‘men of full habit’ there’s only one word that comes to mind:

DO NOT wear any belt under a waistcoat! It will make you look decidedly ‘down-market’.

The black leather shoulder belt originally supported a broadsword. Today it’s only really appropriate with piper’s full dress. The decision to wear the belt under or over the scarf plaid is entirely up to the unit concerned. There is no ‘correct’ way per se. 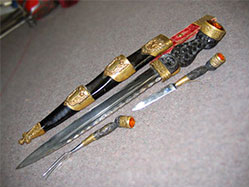 The Dirk is of great antiquity. Originally it was strictly utilitarian in appearance with a blade made from a cut-down or broken broadsword and a handle of brass or bog oak and was used as a ‘maine-gauche’ with the broadsword. Real or imagined gentlemen wore a dirk scabbard inset with knife and fork. The unwashed hordes made do with a horn spoon which they carried in their right stocking.

The dirk became increasingly ornate, eventually being silver- or gold-mounted and adorned with cairngorm stones. 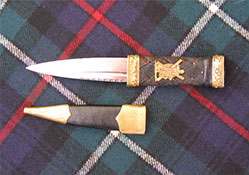 Seaforth regimental-pattern sgean dubh. There is a persistent urban legend popular with misguided gung-ho types than a sgean dubh MUST draw blood if it is removed from its’ scabbard. This fairy-tale was created to discourage young hot-heads from waving their knives around. It’s not holy; it’s a handy wee knife.

Although a Highlander always had need of a small knife, the Sgean Dubh (lit: ‘Black Knife’) as we know it today was introduced in the great ‘Revival’ of highland dress in the 1820’s. The iron rules surrounding hospitality have always decreed that a weapon not be concealed by guest or host, so out would come the wee knife from wherever it was concealed and into the hose-top where all might see it.

When not actually on Parade, the top of the stocking has long been the favoured repository for objects such as tobacco-pipes, drumsticks and KFS sets. 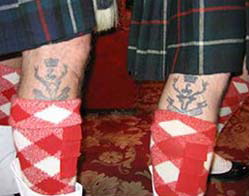 In most regiments, the use of the sgean dubh is restricted to pipers, sergeants and officers. This has been circumvented by the ever-resourceful ‘jocks’ with the introduction of the ‘Regimental tattoo’.

In the Seaforth’s, this takes the form of the Regimental badge tattooed on the right calf and placed so that the top portion is visible above the stocking. The Coronet and Cypher look somewhat like a sgean dubh with the advantage that airport security doesn’t pitch a blue fit about it! 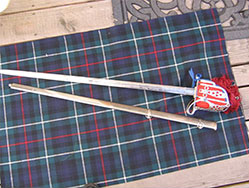 ca. 1881 78th Highlanders Officer’s broadsword. This sword was custom-made by Henry Wilkinson and is about 4” longer than normal. The extra 4 inches nearly ended my career when, commanding a Royal Guard, I near as dammit cut off HRH The Duke of Edinburgh’s head when I saluted him.

The Broadsword, widely but incorrectly called a claymore, is still worn on parade by officers and Drum Majors of the Highland Regiments. It has no other application in modern highland dress.