It is currently held that before 1746, people selected a tartan to wear based on what they liked and could afford. A laird might clothe all his servants in the same tartan either because he liked the look or for economy’s sake, but that’s about it.

This opinion is (sensibly) held by most historians because there is a lack of hard evidence for ‘family’ or ‘clan’ tartans before 1822.

On the other hand one of the primary characteristics of our species is that we seek and maintain group-identity and therefore I think that it is likely that from the earliest times at least some groups would adopt a ‘uniform’ tartan as a badge of small-unit cohesion.

One of the first consequences of ‘the 45’ was the Act of Proscription banning the outward symbols of the Highland culture – primarily the kilt and tartan. The only place that tartan and the kilt were permitted was the Highland Regiments, the kilt being a powerful recruiting tool.

The occasion of HM King George IV’s visit to Scotland in 1822, (stage-managed by Sir Walter Scott) caused a flurry of Scots nationalism as this was the first king to enter Scotland without an army at his back!.

The Scots had no national self-image up to that point – regionalism and religion being the precedent – and their first definition of themselves as a nation was that they were ‘not English’ (sound at all familiar, Canada?). The scramble to create a new national identity focused on the tartan as a national symbol, and not to universal acclaim. many Lowland/borderers were appalled at “this strange new ‘Scottish’ dress” as one editor of the day put it.

The old weavers had died without passing on their knowledge, and the only precedent for kilts and tartan were the Highland Regiments. As each regiment had a regional and family affiliation, this served as the precedent for ‘Family’ tartans.

As each new regiment was ‘raised’, it would initially be authorized to wear the ‘Government’ tartan (now known as the Black Watch). This tartan may have had some regional association with Argyll-shire, but one of the main reasons for choosing the colours was that they were the cheapest dyes available!

With the exception of the Argyll and Sutherland Highlanders and the Black Watch, each regiment added ‘overstripes’ to make their tartan unique to themselves.

Hence, the 78th Foot (the Ross-Shire Buffs whom after 1881 became 2nd Battalion Seaforth Highlanders), raised by the Earl of Seaforth, chief of the Clan MacKenzie, added a buff (later changed to white) and a red overstripe to the basic government sett. The buff stripe was chosen because that was the ‘facing colour’ of the regiments’ coats. The red stripe may have been added to match the soldier’s red coats, but probably just because it looks good.
Incidentally, with wear and use the white stripe becomes ‘buff’ over time, so that was a bit of wasted effort…

This tartan is now generally known as the “MacKenzie” clan tartan, and at least one ‘authority’ who should know better has assigned significance to the colours which are entirely spurious. 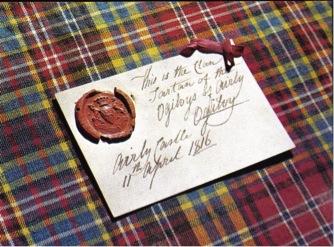 It was at this time that the Highland Society of London sent letters to all the clan chiefs, requesting that they provide a sample of their clan tartans for registry. Most replied gladly, but a few didn’t understand the question as “Clan Tartan” was a complete non sequitor to them. A story is told that in the case of Clan Donald, the Society was apparently told to go away and pick something nice, and stop the bother!