It’s not always wonderful to ponder the gene-pool you squirted from. In a way it’s wonderful, I mean, but in six or seven other ways it can make one nervous concerning tragic consistency, ancestral expectations, and that horrible bloodstream urge to go on and do those questionable deeds that might make those dead faces nod in grim approval.

Daniel Woodrell, Novelist, on the photograph albums of his Ozark clan. 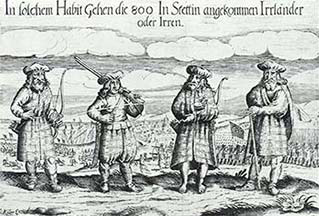 Stetten 1630. The men of MacKay’s Regiment in the service of King Gustavus Adolphus of Sweden

Admittedly, ‘History’ and for that matter, ‘Truth’ is pretty much whatever you want it to be, but there is a great deal of romantic twaddle concerning highland dress that is accepted as truth. I hope to set at least part of the record straight with this essay.

The kilt and its related accessories are worn and recognized the world over. How an archaic tribal dress of an inhospitable corner of a small rainy island escaped oblivion to achieve continued worldwide popularity is the result of several accidents of history.

Every aspect of human culture starts as something new and unsettling. If it is practical and passes the ‘fad’ stage, it enters the popular consciousness as ‘just something that people do’.

The act of defending something as being ‘traditional’ defines it as having started to fade from accepted and unquestioned relevance. It is then that its existence is threatened.

Whether it is worn as an exponent of nationalism or by expatriates, as Haute Couture, or as a chick-magnet, the kilt remains vital and relevant as a garment.

The Origin of the Kilt

Neither kilts nor tartan were invented in Scotland. Various authors have attempted to link the Scottish kilt to the Roman toga and/or the kilts and mantles of Classical Greece or of the Phoenicians, but the proof is lacking.

Certainly all three of these Ancient civilizations traded with Alba (pre-unification Ancient Scotland) in their day, but the earliest surviving record of a Highlander in a kilt (actually a belted-cloak with tartan trews) is a watercolour dated c.1570. 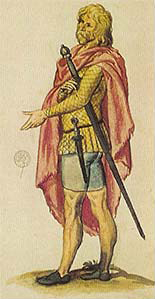 Part of the reason for the lack of hard evidence is that Literate Society’s opinion was ever coloured by Mhi Rhun Mhor nan Gael – the Lowlandman’s Great Hatred of the Highlander. The rest is mere class- consciousness – I’ve yet to see any oil paintings commissioned to commemorate squeegee kids or the alleys of the Lower East Side on the morning after Welfare Wednesday.

I believe that although the introduction of the kilt as daily wear by the Scottish Highlanders (and them only, the Borderers and Lowlanders NEVER wore the kilt until after the great ‘revival’ of 1822 – which also saw the introduction of the concept of “Family” and ‘Clan” tartans.) may have been influenced by the above-named Ancients, the use of the kilt in Scotland was a case of convergent evolution.

There were no roads in the Highlands to speak of until the Industrial Revolution. The few roads that existed before then were the few military roads constructed by General George Wade in the early 1700s to connect the British Army’s garrisons. Any travel therefore was by pony or on foot.

Wading through the damp bracken quickly soaks your trousers and without a regular means of drying your clothes your health quickly suffers. In the worst-case scenario, a cold leads to pneumonia leads to death. If this happens before you breed the next generation, it’s called ‘eugenics’ and academic puff-buttocks write papers about you.

The kilt offers a practical alternative, as the bare lower leg and foot quickly dries. The kilt was therefore a pragmatic solution to a common problem. The kilt, however, was not worn on all occasions. If trousers were considered more practical for a particular activity then they were worn without hesitation. The Highlanders were apparently quite content to “go about bare-arsed in their shirt-tails” when and if the situation permitted! 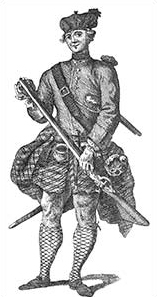 From “The New Highland Military Discipline” by George Grant. London, 1757

The earliest form of the garment was the Phileigh-Mhor, or ‘Great Wrap’ – another, more literal translation is “Big Blanket(!)”, also known as a belted-plaid. This was a single piece of cloth measuring 5 feet or so wide and 4 or 5 yards or so long. The cloth consisted of 2 pieces 28” wide (the maximum width of cloth which can be woven on a hand-loom) which had been sewn together.

All sources list the introduction of the belted-plaid as being in the late 1500’s, but it might well have existed before that date.

Some sources declare the length to be 12 yards, but I believe the maximum length to be 12 feet – I once made and wore a 12-yard belted-plaid. Wearing it was like hauling around a sack of laundry and I can’t imagine what it would be like when wet.

The old documents describe the ‘big kilt’ as being made of ‘six double ells of tartan material (a Scots ‘ell’ was 37” and ‘double’ means ‘twice the usual width’ rather than ‘twice the usual length; i.e. 54” rather than 27”). In addition, Colonel David Stewart of Garth (Sketches of the Highlanders of Scotland, Edinburgh 1822) very clearly indicated that the cloth was folded in half in order to double the thickness (for greater warmth) before it was worn.

The total useable length was therefore in the region of 3 yards, and if you deduct 4 feet for the aprons, there must have been hardly enough material for more than a few pleats across the back. The middle figure in the Leopold illustration shows this perfectly.

There are two reasons why I don’t believe that these old kilts had an inner apron, at least in some instances: 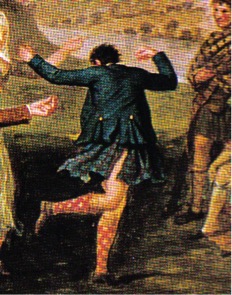 The great thing about the belted-plaid is it’s versatility plus the fact that you will never grow out of the thing – to wear it, you lay the length of cloth out on the ground, kneel on the first cubit (Length of your forearm), pleat the cloth by pulling it toward you in short folds and leave the last cubit unfolded. You then pass your belt lengthwise under the cloth, lay down on the middle of it all with the ‘hem’ at knee-level, cross the aprons over you, belt it and stand up.

The upper cloth can be left hanging or pulled up like a shawl or hood. Most contemporary illustrations show the upper cloth buttoned or pinned to the shirt or coat with a brooch which is how the Highland Regiments wore it. I have tried this, and I can’t understand how to do it without the weight of the cloth pulling the shirt back. I much prefer the ‘toga’ method of wear.

In a hurry, or if there is nowhere dry enough or clean enough to lay the cloth out, the cloth may be simply draped over the shoulders and then gathered-in at the waist with a belt. This latter method looks untidy as hell, but would explain the shabby characters seen in many contemporary illustrations.

At night, the plaid served as a bedroll. The weave was tight enough to resist midges. I was astounded to learn that the ‘Auld yins’ would soak their plaids in the nearest stream, wring them out and then wrap themselves up in the wet cloth. This wetting caused the wool cloth to swell up and become quite windproof. I’ve experimented with this (albeit ‘not on purpose!’) and can confirm that this wetting causes the wool to swell and become both considerably warmer and surprisingly windproof.

The ‘Great Kilt’ was replaced by the “Phileagh Beag” or ‘Small Kilt’ sometime after the raising of the first Highland Regiments. There are two reasons cited for this change:

During this period (sometime after the American War) men’s civilian jackets and then the uniform jacket of the British Army changed from an ‘open’ style with buttoned-back lapels and skirts to a more carefully-tailored and closer fitting jacket which was buttoned up the front. This coincided with a similar change in civilian fashion. This new style jacket didn’t leave room for the vast amount of fabric of the belted-plaid.

The other reason given for the change is that around 1720, an (English) mill-owner one Mr Rawlinson, an English manager of an iron-foundry in Lochaber ‘invented’ the small kilt in an attempt to prevent his (Highland economic-refugee) mill-workers from being sucked into the machines by their plaids!

I believe this story because it was generally accepted as true at the time and for a hundred years after that. Nowadays the story is hotly disputed – because the credit went to an Englishman – by the sort of person to whom this sort of thing makes a difference. 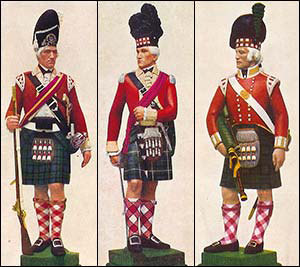 The full width (27”) cloth was laid out and pleated in the same manner as the big kilt and then the upper third of the pleats were stitched, but with no additional tailoring so that the soldier could get four periods of wear out of it, after which the cloth would be cut down into vests or trews.

The upper cloth was retained as a sort of impractical scarf or shawl, as witness the scarf-plaids worn in Full Dress by the Pipers, Drummers and Bandsmen of the Highland Regiments. I suspect that this shawl was retained in its various forms because it ‘looked right’ to men used to the appearance of the big kilt. Vestigial artifacts like this occur all the time. I will examine this trend further under ‘Highland Dress’.