– Ancient, Modern, or Reproduction? Dress? Hunting? It’s all so confusing!

Tartan shops and kilt makers variously describe tartans as ‘Ancient’, ‘Modern’, ‘Reproduction’, ‘Weathered’, ‘Muted’ and probably some other titles which I haven’t heard yet.

What has made my hair prematurely grey is that, with the exception of ‘modern’, the descriptive terms are not used consistently. ‘Reproduction’ usually means ‘muted’ or ‘weathered’, but at least one weaver uses the term to mean ‘Ancient’.

‘Reproduction’, ‘Weathered’ or ‘Muted’ colours are supposed to mimic the effect of weathering. ‘Red’ is a ‘tomato soup’ rather than ‘Fire engine’. ‘Green’ is the green of olives, Blue is a sort of French gray, and so on.

In 1949 a peat-cutter dug up a fragment of tartan cloth on Drummossie Moor (the Culloden Battlefield). I’ve been unable to learn if the peat-cutter dug down any further and found the owner of the tartan…

Careful examination proved it to be the sett now known as Clan MacDonald. Over 200 years exposure to the organic acids in an anaerobic bath had substantially changed the colour-values of the cloth.

DC Dalgliesh of Dunsdale Mill in Selkirk wove a sample of tartan using these ‘new’ colour- values, which proved to be tremendously popular. Soon almost all of the mills were offering almost every tartan woven this way.

Often these tartans are described as ‘Weathered’ but, although the effect is often very pretty, the reproduced effect is not of ‘weathering, but the exact opposite – burial in an anaerobic acidic swamp – but that’s me just being a wee bit pedantic. 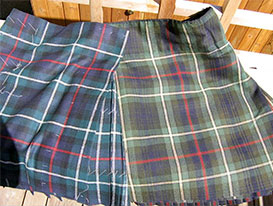 The cloth for these two kilts came from the same mill – but nearly a century of use has faded the one on the right.

“Modern” colours refer to the bright colours produced by modern chemical dyes. ‘Blue’ is a deep royal blue, ‘Green’ is a dark bottle-green, ‘Red’ is a rich fire-engine red, and so on. These colours are generally regarded as a recent invention, not rooted in antiquity. I disagree, but you’ll read all about that later in this page.

“Ancient” colours are supposed to replicate the colour-values of the old organic dye-stuffs (or at least not dyes produced in a laboratory, the argument being that the ‘modern’ dyes are not an accurate portrayal – and again, I disagree) ‘Blue’ is a rather attractive robin’s egg, ‘Green’ is close to grass-green, but ‘Red’ is usually a really nasty orange which sets my teeth on edge.

The notion of “Hunting tartans” I think is historically false – deer are colour-blind (some modern hunting camouflage is blaze-orange and black!) An outlaw would likely choose a muted plaid for reasons of concealment – the non-descript cloth would be cheaper, too – but anyone who has had field experience knows how hard it is to see someone who wishes to remain hidden, regardless of the colour of his clothes!

“Dress” tartan is usually the term used to describe tartans woven so that the principle background colour (red, in the case of Royal Stuart) has been replaced with white. This is a survival of “Arasaid” tartan, which historically was principally worn by women.

Some tartans (the Erskine, for example) are labeled as “Dress” tartans to distinguish them from their “Hunting” equivalent – particularly when the two are the same pattern woven with different colours.

Have a dekko at the following painting, “An Incident at Culloden” painted by David Moirer. 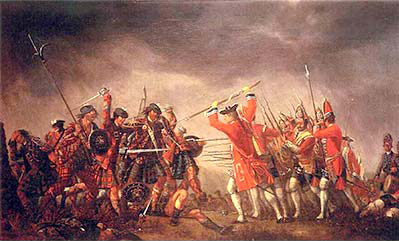 This shows the Cameron and Stewart men of the ‘Appin Regiment’ in close-action with the Grenadier Company of Barrell’s Regiment (later the 4th Foot, later still the King’s Own Royal Border Regiment and now the Duke of Lancaster’s Regiment).

Incidentally, this was the only point of the English line that collapsed under the weight of the Jacobite attack. Had the Highlanders kept up their momentum and fought clear through their objective they would have rolled up the English line while simultaneously causing as much havoc in the rear echelon as possible, which would include the destruction of the Artillery.

This would have likely resulted in a Jacobite victory and the whole world as we know it today would not exist – George II and the whole Royal Family had their bags packed and were prepared to flee to Hanover. No British Empire, a vastly different Industrial Revolution – based in France, not the Midlands, no Great War, no atom bomb, I could go on… and if I have too many pints tonight I probably will.

Such was not to be. Barrell’s was the British regiment least intimidated by the supposed fury of the Highlanders’ charge. The adjacent battalion in the English line ((Munro’s, later the Royal Hampshire Regiment and now the Princess of Wales’s Royal Regiment) wheeled and protected it’s flank and then General Huske counterattacked using four battalions from the 2nd line.

Ironically, had the Jacobites won then all aspects of Highland Dress including the kilt would now almost certainly be nothing more than a historical footnote.

The other factor was the human fascination with the romance of a ‘lost cause’.

Two further “Infantry” observations before I wander back to my point:

The enterprising chappie at centre stage is illustrating the tactic that made the Jacobite forces unbeatable in all earlier battles. He has blocked the officer’s bayonet-thrust by catching the point of the bayonet on his targe and is lifting it up and away, making his opponent open to attack and unable to defend himself. The Highlander’s next move will be to introduce 3 feet of broadsword into that officer’s guts.

This was such a devastating tactic (it ‘unsettled the men to a remarkable degree’ – the same men that had a year before stood in unwavering ranks at the battle of Fontenoy, making wisecracks about the cannonballs plowing through their ranks – they compared them favourably to the black puddings served in the pubs back home) that the British Infantry devised a new defensive tactic which they used for the very first time at Culloden.

When a highlander lifted his targe up and away to disarm his opponent he exposed his left torso and armpit. The new defensive tactic was for the man standing to the right of the man under attack to make a quarter-turn to his left and stick his bayonet into said highlander’s exposed torso. I suppose you just had to trust the man on your right to do the same for you (I want everyone who DOESN’T owe me money to stand to my right!)

This is being demonstrated by the highlander (the one with the bayonet interfering with his digestion) standing next to the fellow I just mentioned, although there seems to seems to be an error in perspective – the musket and bayonet seem to be held by the soldier to the officer’s right but the musket is painted like it’s coming from the left.

The officer depicted in the painting is almost certainly Lord Robert Kerr, Captain of the Grenadier Company, (for according to the War Diary of the 4th Regiment of Foot) Captain the Lord Kerr “received the first charging Cameron on the point of his spontoon, but then a second cut him through the head to the chin”.

Mr. Moirer DID get some details entirely right, which justifies his role as the ‘war artist’ of the campaign – note the red-rimmed eyes of the centre Grenadier, irritated by black- powder grains.

Any roads… note the riot of colour in the Highlander’s clothing. Men wearing more than one tartan, no two tartans alike, and none that resemble any sett we now associate with the Stewarts of Appin or any sept of the Camerons. Note also the vivid red of the soldiers coats – issued at a scale of one new coat per twelvemonth, and as this battalion had just returned from Flanders the coats were very likely well overdue for replacement!

The colours all are very vivid and the ‘reds’ are particularly bright.

Consider that the (Jacobite) models for Mr. Moirers’ painting were all Prisoners of War who had lain rotting in the filth and darkness of a Thames prison hulk for a year, having been marched in irons from Nairn to London. 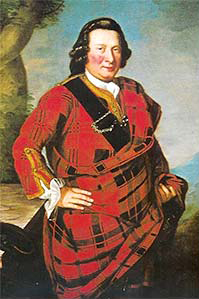 They had fought an exhausting campaign before that, and all in the clothes that they had been wearing BEFORE they were recruited – with no laundry service!

I therefore conclude that the tartan cloth available in the Highlands before 1746 were every bit as colourful as today and with ‘colour-values’ close to what we now achieve with chemical dyes.

There is some evidence that bright colours were a status-symbol – conspicuous consumption, if you will. Most portraits of prominent men of that era show them in red plaids – red being an expensive dye, and red cloth being more time-consuming to weave, what with picking through the skeins of yarn to match the shades.

Go to www.vahistorical.org/sva2003/dunmore.htm for another example.