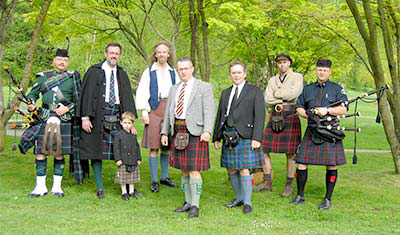 There is a popular myth that the repeal of the act of proscription was greeted with cries of joy throughout the Highlands, accompanied by the rustle of trousers being thrown away in favour of the kilt.

Such was not the case. Throughout the Highlands, Trousers, breeches or tartan triubhas had always been worn when they were the logical choice such as riding a horse.

Far from undergoing a revival, the kilt had assumed a negative image in the Highlands.

The Highland Clearances had depopulated the Highlands to make room for Cheviot sheep (‘the four-footed clansmen’) and hunting interests had kept the glens bare. The kilt had become a sort of livery worn by the employees of the great estates, and as a mark of pretension when worn by the leisure class.

This downward trend continued until very recently indeed. At its’ lowest point (which was right about the time I became an apprentice in the early 1970s), a man wearing a kilt in Scotland was a member of a Pipe Band, had rented it for his marriage, was a soldier, capital-N nationalist, or an American tourist.

It was not until the mid-1980’s that the kilt has re-emerged as a practical item of daily wear. Sure, it remains its Ceremonial and Nationalist image, but men also wear them to work or out hiking.

Over time the little kilt evolved from a simple untailored garment of about 3 or 4 yards of cloth, to the carefully-tailored 7-to-9 yards of cloth that we know today.

Recent years have seen the introduction of the ‘Casual’ kilt. This garment takes several forms, from ‘man-skirts’ made of canvas or denim, to ‘self-colour’ kilts of tweed or melton and tartan ‘casual kilts’. These last are reminiscent of the military kilts of the 1800’s in that they are cut from 4 yards of cloth, and from any distance are practically indistinguishable from the full 8-yard kilt.